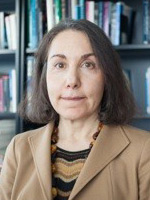 Lesley Ginsberg holds a Ph.D. in English from Stanford University. She arrived at UCCS after completing an AAS-NEH postdoctoral fellowship in 1998. Her interest in antebellum American literature and culture extends to children’s literature and discourses of childhood, the Gothic, gender, animal studies, and print culture/history of the book. Her work has appeared in American Literature, Studies in American Fiction, and the Nathaniel Hawthorne Review. Her essays may be found in volumes ranging from American Gothic (U of Iowa P, 1998) to The Children’s Table: Childhood Studies and the Humanities (U of Georgia P, 2012). Her recent projects include a collection of essays, Romantic Education in Nineteenth-Century American Literature: National and Transatlantic Contexts, edited with Monika M. Elbert, forthcoming from Routledge. At UCCS she teaches courses in early American and nineteenth-century American literature and culture, the American Gothic, women writers, fairy tales, children’s literature, and other topics.