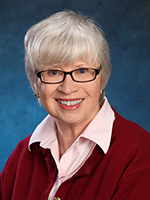 Joan Klingel Ray, a native of NYC, earned her AM and PhD degrees in English at Brown University through Brown’s University Fellowship. She came to UCCS in August 1978 as a tenure-track Assistant Professor. Enjoying a wonderful career at UCCS, she retired at the end of December 2012 as Professor Emerita of English. In AY 1993/94, she was named a CU President’s Teaching Scholar. Professor Ray is on the Board of Trustees of Chawton House Library for the Study of Early Women Writers in Hampshire, England, which is located on the estate that once belonged to Jane Austen’s brother Edward Austen Knight. As a retiree, Dr. Ray still enjoys sharing her love for and knowledge of the works of Jane Austen: in fall 2014, she will teach two sessions on Austen, one on her life and one on Pride and Prejudice, for the PILLAR Institute for Lifelong Learning in Colorado Springs. In spring 2015, she will continue her Jane Austen’s novels series at Grace Episcopal Church, which is free and open to the public and offered on a weekday; it will focus on Mansfield Park, Emma, and Persuasion.